All Around Sydney Call Us Now

Bed Bug Bites
Bed bug bites are unlikely to wake the victim. They can occur anywhere on the body but are often close to blood vessels near the skin.A single bed bug may bite more than once around the same area. However, bites in different parts of the body may indicate being bitten by several bed bugs.
Symptoms of bed bug bites vary between individuals. Early in a bed bug infestation, the victim may not yet be sensitized to the bites and therefore may not develop itchy welts.However, small droplets of blood on the sheets may indicate the presence of bed bugs.

Sources of Bed Bug Infestations
Bed bugs usually enter a property carried on clothing, luggage or furniture.The most common source of bed bugs is to stay at a hotel with an infestation. Bed bugs or their eggs get into clothing or suitcases and are then transported home.It is important to check for signs of bed bugs prior to staying in your hotel room. If there are any signs of bed bugs when staying at a hotel, particularly being bitten when sleeping or seeing blood spots on sheets, take great care in bringing your personal belongings home. If you suspect bed bugs, hotel staff should be immediately notified.Consult with hotel management to assess the risk - it may be necessary to launder, fumigate or treat clothes to ensure they are safe. We advise either placing belongings in the freezer or laundering in hot, soapy water and drying in high heat. When moving belongings that may be infested, you should place them in a large garbage bag to lessen the chance of spreading bed bugs throughout your home.You should also inspect all furniture and mattresses that are brought into your home.

Attack Services technicians are skilled, extensively trained and experienced professionals.
They Can provide you with the best and fastest results in removing  Bed Bugs. For Help Contact Us On 1300 657 686

Adults are light brown, about 1/2 inch long, sport long antennae and the 2 stripes on their back are usually covered by a pair of thin wings. The teenaged nymphs are slightly smaller and do not have wings.
Cockroaches travel along the edges of walls mostly at night, preferring to congregate in the tiniest of cracks where as much of their body surface can contact safety as possible.
Warm weather accelerates egg laying but a female and her offspring can produce a roach stadium of 30,000 individuals in 1 year. Fortunately for human co-dwellers, cannibalism and lack of sufficient food, water and shelter help to regulate the cockroach population.

All adult fleas suck blood from host animals, usually mammals. These ectoparasites are well-equipped for life on a furry food source. A hungry flea in search of a bloodmeal uses its maxillary blades to puncture the skin of its host. A bit of flea spit keeps the blood from clotting while the parasite assembles its siphon, using modified mouthparts which form a tube.
Fleas live wherever you find mammals, throughout the world,
Fleas have evolved into wingless arthropods. Their only need for locomotion is to land on a host, and for that they've developed superior jumping abilities. Fleas can launch themselves quite high in the air, up to 80 times their own height. In addition to strong rear legs designed for jumping, fleas have a substance called resilin above the hind legs. This rubbery substance compresses as the flea prepares to jump, storing potential energy. When the flea thrusts upward, this energy is converted to kinetic energy, the energy of motion. 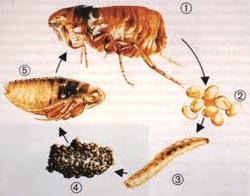 Redback spiders feed mainly on ground-living insects that blunder into their webs, but small vertebrates such as lizards and even mice can fall victim.
Also eaten - after mating - are the tiny male redbacks.
A female redback spider can produce eggs for up to two years after a single mating. Eggs are enclosed in 3-5 dirty-white, woolly, spherical egg sacs suspended in the retreat of the web and guarded by the female.
Spiderlings emerge after about 14 days and disperse on the wind as soon as conditions are right. This is how redback spiders turn up in new places or quickly recolonise areas from which they have previously been removed. 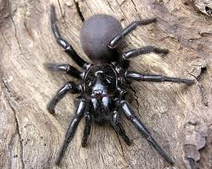 Sydney funnel-web spiders are large black spiders with  big powerful fangs, which can be up to 7 millimetres long. The body of the  female is about 3.5 centimetres long.
The male is smaller and about 2.5 centimetres long. Their bodies are covered with fine hairs and they have shiny legs.
Male Sydney funnel-web spiders are Australia's most dangerous spider. These aggressive spiders grab onto their victims and bite several times, injecting a very poisonous venom. Some people have died from the bite of these spiders.

Where do Sydney funnel-web spiders live?
Sydney funnel-web spiders live in and  around Sydney, in New South Wales, Australia. They live in small, neat holes  lined with a collar of silk. The holes are made in shady
places under rocks,  shrubs, logs and leaf litter. Silk threads lead away from the entrance to the  burrow. These are trip lines and when prey walks into them, the spider dashes  out of the burrow to grab it. The spider bites the prey and takes it back into  the burrow to eat. Funnel-web spiders prey on and eat beetles, cockroaches,  insect larvae, snails,millipedes and sometimes even small frogs and lizards.

Life Cycle
A female mates with a male spider and then lays from 80 to 200 yellow-green eggs, which she wraps in a silk egg sac. She keeps the sac inside her burrow and guards it until the young spiders, called spiderlings, hatch about three weeks later. The spiderlings share their mother's burrow for a few weeks before wandering off to find a place of their own to live. Males die a few  months after mating but females can live and breed for several years.

Can funnel-webs swim?
Wandering funnel-webs spiders often fall into backyard swimming pools and they can stay alive for hours. They can't swim but they can trap a small bubble of air in hairs around the abdomen, which aids both breathing and floating, so it should not be assumed that a spider on a pool bottom has drowned. As they gradually get waterlogged, their buoyancy decreases and they eventually sink and drown.  Funnel-webs have been known to survive 24-30 hours under water.

Can funnel-webs jump?
Despite what many people think, funnel-webs can' t jump. However they can move quickly, and they will rear up when irritated and make sudden lunges when striking